Brock is a playable character appearing in the Unreal series.

Brock is a human Tournament competitor who comes from a rich, Martian family. He is a real ladies man and a bit of a hothead.

He joined the Iron Guard who served as personal bodyguards to the powerful arms smuggler Jihan Nyhn. After Nyhn's assassination, the then unemployed Iron Guard joined the Tournament to vent their aggression (UT).

For a while, Brock was the boyfriend of his team mate Lauren, who was said to be Jihan Nyhn's lover before that.

In the 2302 Tournament Brock fought alongside Malcolm, and gained much respect for him (UT2003, UT2004). After Malcolm was defeated and crippled by Gorge, Brock tried to avenge Malcolm by ambushing Gorge outside the Tournament arena on the planet Deneb IV. Gorge needed less than a minute to react and kill Brock. Wrought with grief, Lauren took her own life.

With three of their most popular competitors taken out so quickly, the Liandri Mining Corporation paid the Phayder Corporation a huge amount of money to have the popular Brock resurrected as Necris, effectively turning him into Liandri property. The process caused him to lose all memories of his previous life. Lauren was also resurrected, without losing her memories, but making her only marginally sane. Brock and Lauren didn't get back together.

As a Necris, he has fought in the 523rd Nakhti Ascension Rights, armed with his new signature weapon, the Dark Staff (UC2). 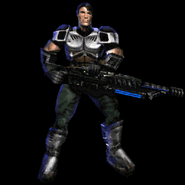