Unreal Wiki
Register
Don't have an account?
Sign In
Advertisement
in: Team-based gamemodes, Gametypes, Gamemodes with capture limit,
and 15 more

"Advance on the enemy stronghold and take their flag while defending your own. Should your flag be taken, your team will be powerless to make a successful capture until it is returned, so defend it with your lives."
– Unreal Championship in-game pre-match screen

Capture the Flag, often abreviated as CTF, is a team-based gametype found in all of the Unreal Tournament and Unreal Championship games.

Capture the Flag (CTF) is a team-based gametype where each team has a base and a flag inside of it. The objective of each team is to capture the other team's flag and return it to one's own flag. A flag cannot be returned if one's own flag is stolen. If the flag carrier dies or translocates, the flag is dropped. Dropped flags can be picked up by the team of the opposite color, and they are reset if touched by the team of the same color as the flag or if left untouched for 15 seconds. The flag is also returned if it falls out of the area of play (for example, if the flag carrier falls into a pit). The first team to reach the game limit wins the match.

Capture the flag maps tend to be highly symmetrical. This is to achieve a perfect balance between both teams, because asymmetrical layouts often lend a certain bonus to one team or another. In addition, there are almost always multiple entrances to the flag area and they're often from different directions. CTF tends to have at least 2-4 lower routes between flags, 1-3 upper routes, a large central area with a valuable pickup, and enough room to maneuver easily around the flag. Most CTF maps are linear (so that the bases are laid out across from each other--the very best example is the (in)famous CTF-Face) and as a result, the z-axis component and the degree to which paths overlap is extremely important. Both effect how easy it is for defenders to catch up to the flag carrier, as well as how easy it is for attackers to invade.

Capture the Flag maps range from the very rare 1v1 (CTF-1on1-Joust) all the way up to 32 players. The average is around 6-16 players. Depending on the size of the CTF map, there will often be at least two 50 armors and one 100 armor pickup, and finding a UDamage or a Big Keg-O'-Health is not uncommon. However, these items (except the 50 armors) are often difficult to reach or far out of the way to provide the necessary trade-off for reaching them.

Capture the Flag uses all standard "Deathmatch" weapons, and occasionally the grenade launcher or mine layer are thrown in there in custom maps. Players start with the shield gun, assault rifle, and translocator (unless disabled). In addition, all pickups are supported, including adrenaline. Often, the shock rifle, bio gun, or flak cannon is found close to each flag. The rocket launcher, if it exists in a CTF map at all, can be found pretty much anywhere, often opposite the flak cannon. The sniper, link gun, and minigun are usually found towards the center of the map, under the theory that they're more difficult to obtain there, which is justified because they're the more "hitscan" weapons and UT2004 is a hitscan-dominant game. Health vials and adrenaline are also prevalent, and health pickups can usually only be found near the flag (usually two of them) and sometimes, on larger maps, in the center.

Instagib Capture the Flag (iCTF) is similar to CTF, and is even played on the same maps. The main difference is the use of Instagib rules; that is, there are no items in the map, and the only weapon each player can carry is the Super Shock Rifle. There are also rules that allow teammate boosting and low-gravity.

Vehicle Capture the Flag (VCTF) is similar to CTF, however, VCTF has vehicles and is played in specialized maps. VCTF is only available officially in Unreal Tournament 3, though Unreal Tournament 2004 has it as a hidden mode with no maps. In UT3, with the exception of the Hoverboard, no player may use a vehicle when they have the flag; in UT2004, on the other hand, only the Manta and the Raptor are excluded from the flag-carrying vehicles.

Each team gets a point per capture, and the capturing player gets 7 points. Flag carrier killers get 3 points. Individual points are just for comparison: only successful captures determine the winning team. The overall game can be played under Score Limit or Time Limit rules. The first team to successfully capture the flag enough times to reach the Score Limit, or whichever team has the most captures when the Time Limit is reached, is declared the winner.

"I just saw something on PlanetUnreal about 4Way CTF, and Epic deciding 1/2 way through not to support it. Not true. It was almost exactly the same amount of work to do the amount of 4 team support that shipped with UT as it was to only support 2. We put the other 2 flag colors in there so enterprising Mod authors could make 3+ team variations on CTF."
– Alan Willard

"The players are divided into two teams, blue and red. Each team has a base with a flag that they must defend. Points are scored for a team when a team member captures the opposing team’s flag, by bringing it back to the team’s base while their own flag is safely contained in the home base."
– UT manual
"Capture the Flag is a team game where one team must capture the other team's flag a predetermined amount of times to win the match. To capture the other team's flag, run over the flag in the other team's base, and then return to your base and touch your flag. You drop the flag if you are killed or use the Translocator."
– UC manual
"Each level has two team flags. In order to score, one team must penetrate the opposing team’s defenses, “Capture the Flag,” and return it to their home team’s flag. If the flag carrier is killed, the flag drops to the ground for anyone to pick up. If your team’s flag is taken, it must be returned before your team can capture the opposing team’s flag."
– UT2004 manual
"Grab the enemy flag and return it to your team's base. You can only score if your flag is safely at your flag base."
– UC2 manual
"Team based capture the flag. Invade the opposing team's base, grab their flag, and bring it back to your own to obtain glory."
– UT3 manual 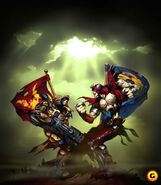