"%k ripped into %o with a blood soaked Chainsaw."

Based on an antique wood-cutting tool, the chainsaw is a devastating melee weapon capable of instantly inflicting massive damage. The primary fire employs a thrust maneuver, while the secondary fire sweeps the blade from side to side (an ideal move for decapitations)."
– UT Manual

The Chainsaw is a melee weapon found exclusively in Unreal Tournament.

Classification
Melee Blade
Primary Fire
When the trigger is held down, the chain covered blade will rev up. Drive this blade into opponents to inflict massive damage.
Secondary Fire
The revved up blade can be swung horizontally and can cause instant decapitation of foes.
Techniques
The chainsaw makes a loud and recognizable roar and can be avoided by listening for audio cues.
Even though it's headshot ability is powerful, but the usual fire is so weak that an enemy armed with an Impact Hammer is sure to win by throwing the chainsaw user somewhere far enough, making the chainsaw unable hit the opponent long enough to win.

Despite being primitive technology to originally cut wood, it is nevertheless a powerful weapon which causes a great deal of damage. The primary fire simply speeds up the saw, while secondary fire cuts horizontally like a sword, capable of decapitating an enemy.

The Chainsaw is only available through the Chainsaw Melee mutator, where it replaces the Impact Hammer, or through the use of summoning via console commands.

: "It's been five years since I've seen one of these" 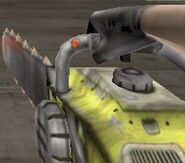