The Combat Assault Rifle (CAR) is a weapon found in Unreal Mission Pack: Return to Na Pali and Unreal II: The Awakening.

The M32 Combat Assault Rifle (CAR), dubbed 'duster' by marines, is the standard issue assault rifle of the various terran forces (including the marines and the colonial authority). You receive this weapon from the start of the game and it may be the most versatile weapon you encounter.

The M32's primary fire mode is an automatic stream of bullets, useful at medium to long ranges, and the alternate fire mode shoots a cluster of uranium shards that detonate on impact and ricochet in a flak pattern. It is very useful at close range and to bounce shots around corners.

It feeds off box magazines in bullpup configuration, each containing 75 rounds. Isaak describes the rounds themselves as 'depleted uranium shards', although he does not specify how they function. He does mention they are caseless, but 'build up a nasty dust', from where the nickname 'Duster' comes. The dust must be ejected when reloading.

It appears to cycle the rounds through some sort of rotating cylinder that can be seen on the side of the weapon, and, upon triggering the alternate fire, all five shards loaded in the cylinder would be shot without being detonated somehow.

300
50
400
"This rapid-fire automatic weapon is similar in function to the Minigun, but the Combat Assault Rifle boasts greater accuracy and larger rounds than its formidable cousin. The secondary fire emits a cluster of five rounds that explode on impact. This all-purpose weapon is effective at short, medium and long ranges."
– Unreal: RTNP manual

Primary Fire
Fast machine gun fire that allows a fast kill against most enemies.
Secondary Fire
Releases five bullets that have not been ignited. The result is that on impact, which is almost instantaneous, the bullets explode, causing more damage than a normal shot from the Combat Assault Rifle.

Primary Fire
Fires bullets at a machine gun-like speed, killing most adversaries fairly quickly. As the rate of fire is 10 rounds per second, the primary fire eats ammo very rapidly. It is useful at medium and close range.
Secondary Fire
Produces a slow-moving energy projectile that breaks apart on impact, releasing five shards bouncing off surfaces. Compared to the primary fire, the secondary fire is two times slower, but each used round does 4 more damage, therefore it uses a lot less ammo than the primary fire and deals more damage. This mode is useful in close and medium ranges and some times even in long range. It is very useful in corridors or other places with less space. At closer ranges, this mode usually a better choice for direct attacks since it knocks weaker enemies off their feet, can be fired quickly before you retreat behind cover, and can't be blocked by a charging Skaarj's arm blades (although it can be dodged). Bouncing it around corners is useful in many situations. It can be used to blow up turrets without exposing yourself to danger, and if you know where an enemy is, are fairly close, and have a fair amount of ammo, repeatedly launching grenades off walls to strike around corners is very effective.

Unreal 2 features a Combat Assault Rifle very similar to the one in Return to Na Pali. It uses reloadable clips and has to reload after some time, like all Unreal 2 weapons. It is also called M32 Duster to specify the model and prevent confusion. 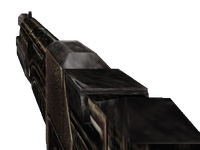 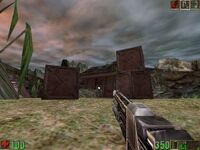 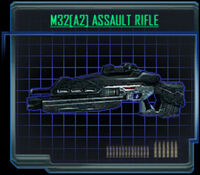 Retrieved from "https://unreal.fandom.com/wiki/Combat_Assault_Rifle?oldid=34099"
Community content is available under CC-BY-SA unless otherwise noted.