If you're looking for the Unreal Championship version of the map, you might want to check DM-Insidious (UC map).

If you're looking for other versions of the map, you might want to check Recurring maps#DeathFan.

"From Below ver. 2"
by Kevin Riepl

This map is considered a spiritual successor of Unreal's DmDeathFan.

0.0
"Step into the dark underworld of the Inquisition, where the ghosts of the innocent are your only companions."
– Mission description

After winning this match, you're given the chance to add Remus to your team. 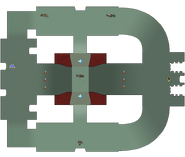 Retrieved from "https://unreal.fandom.com/wiki/DM-Insidious_(UT200X_map)?oldid=33020"
Community content is available under CC-BY-SA unless otherwise noted.