Loxi is a small DM map with a medieval theme. There are 3 floors: The ground floor is only 1 room large, but has some valuable pickups like the Shield Belt and the Jump Boots. The 1st floor is the largest, spanning several rooms and featuring half of the weapons. These 2 floors are connected by a single lift. The 1st and 2nd floor are connected via a lift and a slope. The 2nd floor has the other valuable pickups such as the Eightball and Superhealth. There's also an outside part atop the main hall with the Eightball pickup. The rooftop can only be reached with the help of the Jump Boots from the ground floor. For description purposes, these zones will be named:

"Previously released "free" DM map I whipped up for your fragging pleasure a month ago."
– Fusion Map Pack readme 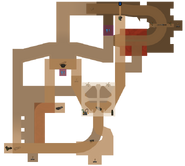