A large abandoned oil rig. It has the following named areas:

5
"This oil rig has been converted into a Domination Arena. It is located near strange meteorological phenomenon in the northern reaches of Kryllia. Use the architecture to dominate your opponents."
– Mission description

Winning this match nets you the Domination Championship.

"I decided to do an Oil Rig after Armageddon. I thought the movie was total crap but it wasn't a total loss of 2 hours and $20 since some graphical elements were really interesting. Now doing an Oil Rig is extremely difficult since it's structure it's extremely complex with a lot of pipes, pillars, substructures, grids, machines and all.

Since I had to keep the "200 polygons in view" limitation of Unreal Tournament, I did some sketches on paper to find an optimum layout. I used a lot of coronas to contrast from the black background and give more depth to the Rig. Keeping the polygon count low was the hardest part. The original Level was supposed to be an Assault but Cliff and I agreed to convert it to Domination since Assault levels are difficult to do and require a very good coordination between the Level Designer and Steve Polge (the AI programmer). Since I was still in France at this time it wasn't really possible to do a good Assault level in these conditions. The initial Level had a crashed Spaceship under the water where the attackers appeared, they had to grab weapons and scuba and swim to the pillars of the Rig, they had then several possibilities to attack the Rig: Pillar 1, Pillar 3, the Crane or the Oil Tube. These were 4 ways to reach the higher level and deactivate the computers of each pillar. I asked Dave to make some sound effects (Lift 1 activated, Lift 3 activated, Crane activated) to give defenders info about which pillar to defend. I also had a cool holographic display but I had to remove all this.

I wanted to make this Level in a "Day setting" but that was to hard to accomplish due to the Skybox parallax effect. The transition between the World and the skybox is very tricky in this case because the water is completely flat and stop straight and you would see the lines between the water and the sky. An easy solution would be to encapsulate the Level in a cylinder but it would take too many polygons for this already "polygon-intensive" Rig. The other solution is to make the world as big as possible so I made it 64000 unit wide, the maximum size of an Unreal Tournament World but the parallax effect was still noticeable at the top of the Rig Tower. So I had to make it at night, then the line between the SkyBox and the World geometry is the exact same color (black!), so the parallax is not visible. Now that was working but the sky was boring so I added this cool "aurore boreale" effect.

I'm not a fan of Hard-Rock but I think the brutal music I choosed is adequate for this 'Heavy-Metal' Level."
– Inoxx's website[2]
"(...) The original design was for an Assault map. A spaceship was crashed under the station and the attack team had to take control of the oil rig."
– Inoxx's website[3] 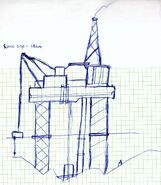 Sketch of the map.

Sketch of the map.