"No allies. No rules. It's every man, woman, and mutant alien freak for themselves. The player with the most frags wins."
– Unreal Championship in-game pre-match screen

Deathmatch is a gametype found in all games in the Unreal series.

The objective in Deathmatch is to score "frags". A player can earn these frags by killing an enemy player. One frag will be awarded for a kill. If a player kills him/herself, the player will lose a frag. Frags are only credited for reducing a player's health to zero, so if, for example, a player is shot mid-fall and their reduced health means the fall kills them, it counts as a suicide.

"If you're running a UT competition I'd strongly suggest using these settings:

One on One
----------
Weapons Stay- OFF
Game Speed- DEFAULT
NO TRANSLOCATOR
NO BOTS (duh)
Game Setting- HARDCORE
Mutators- NO REDEEMER, NO POWERUPS
Frag Limit- 20
Time Limit- 10

You seem more Old School. I'd suggest playing the following maps then:

These are maps that were made just for the gameplay, the architecture is dictated by the gameplay. These maps are more traditional, mazey DM.

2. "These maps are bland! I don't want a cramped mazey bland area; been there done that! Show me something new!"

I'd suggest playing the following maps then:

The Unreal Engine handles interior and exterior spaces extremely well and maps like Peak and Hyperblast really take advantage of this. These maps are original, you get to frag in really exquisite environments. Sure, they may not be the ones you play in a tourney, but they sure have that "wow" factor."
– Cliff Bleszinski[2]
"Many server admins think that just because a map shipped with the game that it is ok for dozens of players to play at once.

Deathmatch maps like "Fractal," "Oblivion," and "Stalwart" are TINY and are meant for one on one, no more. When you run a server with a 32 player limit and add these maps to your cycle list you're just ruining the play experience for those who are trying to find a good local server.

So, please, don't cycle these maps unless you're keeping your max players very low."
– Cliff Bleszinski[3]

"Kill as many competitors as possible and try to avoid being killed by them. The player who reaches the frag limit first (or has the most frags when the time limit is reached) is the winner. Winners advance to the next arena in the ladder."
– UT manual
"Deathmatch is an every-man-for-themselves sport in which you use weapons and pickups found throughout each match to kill the other players. Every time you kill another player, your score goes up one point. The first player to reach a predetermined score wins the match."
– UC manual
"Players are pitted against each other in a balls-to-the-wall free-for-all. Anything goes. The one with the most kills wins."
– UT2004 manual
"Kill or be killed. Score more kills than your opponents to win."
– UC2 manual
"Free-for-all deathmatch action."
– UT3 manual 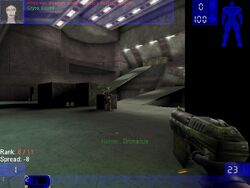 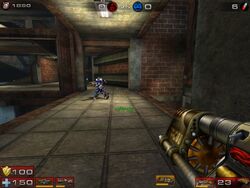