The Dispersion Pistol is a weapon featured in Unreal, Unreal Mission Pack: Return to Na Pali and Unreal II: The Awakening. A pair of weapons based on its design are featured in Unreal Championship 2: The Liandri Conflict.

The Dispersion Pistol is an automatically-recharging energy pistol which fires relatively weak non-hitscan energy bolts. Its secondary fire stores up a charge in the capacitor before releasing it, resulting in a much more powerful bolt with splash damage.

It was built by the Unified Space Military, and was also used by the Unified Military Service guards. This weapon uses a Brilithium Power Core, capable of firing a high-pulse energy bolt that can deterialize a lifeform.

"& was killed by &'s Dispersion Pistol. What a loser!"
"This is the standard issue weapon of the guards aboard the Vortex Rikers. While not particularly powerful in its standard configuration, this gun becomes a virtual death cannon when supercharged with powerups. The Dispersion Pistol automatically regenerates its infinite ammo supply, so you will never be defenseless with this weapon in your arsenal.

Primary Fire: Initially, low-power, high-illumination energy projectile (can be useful for lighting up dark areas). Very destructive when supercharged with powerups.
Secondary Fire: Projectile energy is charged up (to 500 percent) as the fire button is held down."
– Unreal manual

In Unreal and RTNP, the Dispersion Pistol is the player's default weapon. As such, it normally fires weak energy bolts. One useful feature is that it recharges energy over time, so it is always available and can save the player ammo for more serious situations. The Dispersion Pistol's projectile also has a light on it to allow the player to see in the dark if they do not have Flares or any other light source. In this vein, it is also useful for tasks such as breaking open barrels and crates when searching for items.

Holding the secondary fire button allows energy to build up, letting the player fire more powerful blasts, depending on the amount of time the trigger was held. When it fully charges at a maximum of 500%, it automatically fires and deals splash damage.

This Dispersion Pistol can be upgraded up to four times by collecting powerups. Each successive powerup morphs the pistol into more elaborate shapes, makes the energy bolts more powerful, increases the reserve capacity, and changes the bolt's primary fire color. However, the upgraded versions take more energy from the reserves, making it useful for only a few powerful shots, and lowers the rate of fire.

Even though there are more than four Dispersion pistol upgrades, excessive ones will have no effect.

8
"Alternate Names: LEPEW-13 or “Law Enforcement Personal Energy Weapon, Type 13,” also known by cops as a “Dispersion Pistol,” or more derisively as a “popgun.” Ammo: Does not need ammo; recharges from a small quantum source in the handle.
Primary Fire: A fairly low-power, slow-moving quantum energy pulse.
Alt-Fire: A pulse with a higher energy level. The weapon charges up over time, stores the charge in a capacitor, and releases a higher-power blast.
Uses: While the dispersion pistol is a fine weapon for a law enforcement officer, it was not designed for military use and is ineffective in high-intensity combat. Use it only as a last resort."
– Weapon description
"The T-13 popgun is yer standard law enforcement sidearm. Doesn't need ammo - recharges from a quantum pack in the handle. Primary fire is a slow-moving energy pulse. Alt-Fire charges up a stronger pulse until you release it. A dependable fall-back weapon, but not much use in a crowd."
– Isaak

The LEPEW-13 was designed by the TCA, and is similar to the version in Unreal. Unlike Unreal's Dispersion Pistol, however, Unreal II's cannot be upgraded, but can hold the fully charged projectile until the player needs it, rather than firing it off as soon as it charges up. Because it is relatively weak, players should primarily use it as a fall-back weapon. However, the alt-fire inflicts a significant amount of electromagnetic damage, quite useful for taking out electronics and machines. A small quantum source in the handle automatically recharges the pistol.

Overall this is that basic gun that never goes away, because it uses a self recharging energy source. You receive this weapon at the start the game, and have it until the very end. The primary fire of this weapon is a slow-moving energy sphere that is pretty powerful for your "if you only have this gun, run" weapon. Alternate Fire is energy sphere with increase damage that must be charged before firing. This gun will take down some enemies in the beginning of the game, but is less effective against the stronger creatures you meet later in the game.

In Unreal Championship 2 the Nakhti dual-wield a weapon called the Nakhti Scorpion, which is based on the TCA's Dispersion Pistol design. The weapon's secondary mode needs to charge like in other versions, but fires a blast that freezes opponents in place.

N/A
N/A
"The tournament rules require combatants to use pistols, so Raiden makes his own. Each shot fires a small lightning bolt, and he can also fire a charge that shocks and immobilizes opponents."
– Weapon description

Raiden uses Lightning Bolts, fashioned after a set of Nakhti Scorpions using electrical energy. The weapons fire lightning bolts, but functions in much the same as actual Nakhti Scorpions. 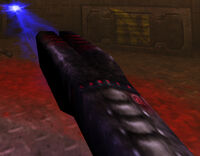 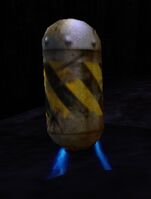 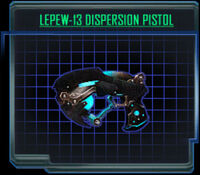 Retrieved from "https://unreal.fandom.com/wiki/Dispersion_Pistol?oldid=38193"
Community content is available under CC-BY-SA unless otherwise noted.