If you're looking for other versions of the map, you might want to check Recurring maps#Deck.

The map that started the popular series, DmDeck16 has the same layout as the other Deck maps. The large hall with several levels is largely surrounded by an U-shaped corridor. The multiple levels in the main halls are connected by a series of 3 slopes, which give the map its identity.

There are a few differences with later versions of the map. Though all of the weapon pickups didn't change positions, the Toxin Suit did. The UT2004 version of this map, DM-Deck17, also has a few other corridors this map doesn't have. 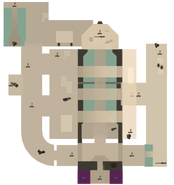 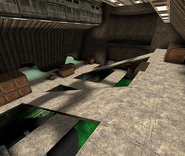