If you're looking for other versions of the map, you might want to check Recurring maps#HealPod.

DmHealPod (a.k.a. Heal Pod) is a Deathmatch map for Unreal.

DmHealPod is a small map with a twist. It lacks health pickups, but in order to make up for it, it features a healing pod right in the middle of the map, which heals 8 HP per second. It comes at a risk though. There are buttons in the floor in the west and south entrances to the Main Hall which, when walked over, make the pod stomp down, killing anyone standing within the force field.

The map has 3 floors. In the main hall, the 3 floors are connected via lifts in the north and east entrances. There is another section of the 3rd floor (with an Assault Vest and ASMD pickup) in the northeast room, accessible by another lift. Though for improved mobility, it is advised to use the Jump Boots, which are hidden in a ventilation duct in the south part of the 1st floor. 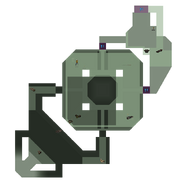