Unreal Wiki
Register
Don't have an account?
Sign In
Advertisement
in: Weapon stubs, Stubs with tasks, Weapons,
and 14 more

The Enforcer (known in early games as the Automag) is a handgun in the Unreal series.

"& got gatted by &'s Automag."
"This easy to handle gun uses gun-powder-based bullets (in dual clips of 10) for ammunition. Try to keep track of how many bullets you have left in a clip: attempting to change clips with a pissed off Skaarj in your face is not advised.

The Automag fires rounds via the use of gunpowder. The weapon shares Clips and Bullets with the Minigun. In secondary fire mode, the player character tilts the pistol sideways in a "gangsta-style" carriage to fire less accurate rounds at a higher rate.

It can shoot 20 rounds consecutively, after which it has to be reloaded. It can also be reloaded by switching to another weapon and then switching back to the Automag.

This lightweight yet high-powered handgun is an accurate and potent killer at close or medium range. So easy to handle you can wield one in each hand, the Enforcer’s already-quick action can be increased by utilizing the slightly less accurate (but equally deadly) sideways-carriage firing technique."
– UT manual

The Enforcer is the default weapon players spawn with, along with the Impact Hammer.

A semi-automatic pistol, the successor to the Automag from Unreal. The player can dual-wielded Enforcers if they happen to find a second one. Secondary fire tilts the Enforcer sideways in a "gangsta" style for greater rate of fire at the cost of accuracy. Even when dual-wielded, the 3rd person perspective, as during the end of a game, will show the player with only one. However, two bullet cases come out when shot.

Default weapon of the Juggernauts. The human and Necris characters use modified versions whose alternate fire can freeze and stun their opponents respectively.

50
16
100 (200 dual)
"For decades, the Enforcer pistol was the combat sidearm of choice. Veteran soldiers appreciated the lightweight handgun's power, accuracy, and balance. In recent years, the ever-burning desire for greater firepower led to general issue of the AR770 assault rifle. Military procurement officers were drawn to the AR770's higher cyclic rate and underslung M355 grenade launcher, but seasoned combatants missed the dependability of the Enforcer. Axon Research listened to the soldiers, and their new Enforcer MP ("Machine Pistol") model provides the best of both worlds. Side-fed magazines provide greater capacity, while balancing the shooter's aim when wielding two pistols. With a deadly accurate semi-automatic mode, and a selectable burst fire mode, the Enforcer is back, and the modern battlefield will never be the same."
– Weapon description

Unreal Tournament 3 marks the first appearance of the Enforcer since UT. It is "combined" with the AR770 to have a high fire rate, but it's still small, akimbo-wieldable, and the alt-fire is replaced with a 3-round-burst fire. If you have two, then it is considerably one of the best weapons in the game, with hitscan power, high accuracy and fire rate, and decent damage to boot.

40
20
40 (80 dual)
"Side-fed magazines provide greater capacity, while balancing the shooter's aim when wielding two pistols. With a deadly accurate semi-automatic mode, and a selectable burst fire mode, the Enforcer is back, and the modern battlefield will never be the same."
– Weapon description 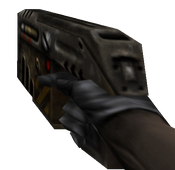 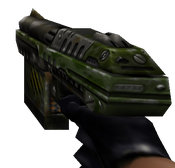 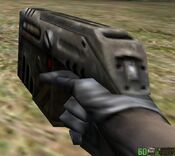