"Provides temporary light in dark areas when lit and tossed on the ground. You cannot hold onto a lit flare. Use a flare to add a temporary light to an area."
– Unreal manual

The Flare is an item appearing in Unreal and Unreal Mission Pack: Return to Na Pali.

Capable of illuminating large and dark areas. Flares are only temporary, exploding a minute or so after being thrown. It's very common, but it is awkward to use, plus the presence of better illumination items like the Flashlight and especially the SearchLight makes it almost worthless. You can hold an infinite amount of these.

When thrown, it provides a temporary light source to players around it. After a short time, it will explode. The explosion damage has a very short radius and causes minimal injuries, but if used in large amounts can be fatal to nearby creatures. 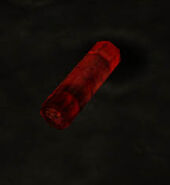 Retrieved from "https://unreal.fandom.com/wiki/Flare?oldid=35525"
Community content is available under CC-BY-SA unless otherwise noted.