If you're looking for the Unreal Tournament 2004 team, you might want to check Juggernauts.

The Goliath Tank served the military for two decades as a front-line offensive weapon. Entirely protected by a double-plate Carbon-Duranium shell, the Goliath may lack in top speed, but more than makes up for it in sheer endurance and brute force.

Up to two people may be in the Goliath at the same time.

The Goliath is very powerful; it can take out Scorpions, Raptor, Mantas, and other vehicles with ease. The goliath has 800 HP, which makes it third for HP, highest being the Leviathan (6500, or 5000 in UT2004).

Due to its slow speed, the Goliath is not a reliable vehicle to get places quickly. Also, it is vulnerable to air attack, unless the minigun seat is occupied.

2
"Recently replaced by a newer model, the Goliath tank served as a front-line offensive weapon for two decades. Protected by a double-plate carbon-duranium shell, the Goliath lacks top speed, but makes up for it with endurance and brute force. Four synchronized stabilizers let the turret rotate independently from the chassis, allowing the tracking of enemies at medium and longrange. The Goliath’s main cannon delivers a massive 140mm depleted-uranium round at over a mile a second. A second teammate can enter the tank and provide cover fire with the dual .50-caliber machine guns. Working in tandem, these weapons offer provide a strong defense against both air and ground attacks."
– Vehicle description

The Goliath is a standard tank with a powerful 140mm main cannon that devastates infantry, energy nodes and other vehicles alike. It has limited vertical elevation, however, which makes it vulnerable to the Raptor (Although it is far from impossible to down a low-flying Raptor with the cannon, given a little practice and luck). In addition, its turret is slow-moving, taking time to position, making it difficult to draw a bead on a quick moving target. Rotating the tank itself in the same direction as the turret is a tactic often used while the Goliath is stationary to increase the turret's rotation speed, and therefore be able to line up a shot in less time.

Its 2nd position offers a zoomable machine-gun turret atop the main turret that can offset these weaknesses to a limited degree. However, the amount of damage dealt by this weapon is moderate at best, and it is also unable to point straight up, one of the preferred places to attack the Goliath, either on foot or in a Raptor.

2
"The Goliath-class tank has served the Axon infantry as a front-line offensive weapon for more than two decades.

Protected by heavy RHA carbon-duranium armor, the Goliath trades speed for endurance and brute force. Four synchronized stabilizers left the turret rotate independently from the chassis, and the built-in targeting scope allows for the tracking of enemies at both medium and long range.

The Goliath's main cannon delivers a massive 140mm depleted-uranium round at over 1500 meters per second. An additional gunner seat features a turret-mounted 12.7mm machine gun. Working in tandem, these two weapons provide a strong offense against both enemy infantry and vehicles."
– Vehicle description

Since the Goliath's main cannon can't aim upwards, it's always a good idea to have a gunner take the second seat to defend the tank. 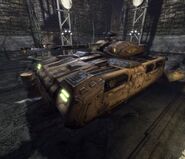 Retrieved from "https://unreal.fandom.com/wiki/Goliath_(vehicle)?oldid=23066"
Community content is available under CC-BY-SA unless otherwise noted.