Gorge is a character in the Unreal series.

Gorge was able to defeat reigning Tournament Malcolm in 2302, leaving him with a snapped spine (UT2003), and making Gorge the new champion. Gorge only remained champion for that year, though. His treatment of his fanbase and the high popularity of his archrival Malcolm means that he will never be popular.

At the time Brock fought alongside Malcolm and gained much respect for him. Brock tried to avenge Malcolm by ambushing Gorge outside the arena on the planet Deneb IV. Gorge needed less than a minute to react and kill Brock.

"Gorge is determined to prove that his one year reign as Tournament Champion is no fluke, and he has re-assembled the Juggernaut team he led to the championship. Axon Research Corporation has made armor and bio- genetic upgrades to the Juggernauts design for this year's tournament."
– Unreal Tournament 2004

He returns alongside the rest of the cast in 2004, leading the Strong tier team Juggernauts, still backed by Axon, though this time he cannot reach the finals.

Gorge doesn't appear in the Ascension Rites in any form, however he has his own ladder, which is unlocked after completing Malcolm's one. It remains to be seen if both ladders are canon, since they don't have related matches with either the Rites or Anubis's Ladder.

"The first time we scouted this arena before a match some FNG made a crack about how it's not the heat, it's the humidity that gets you. So I shoved him into the lava. He was still screaming when they redeployed him into the room. After we convinced him he wasn't still on fire, he had to agree, it's the heat that gets you."
– DM-Molten description. 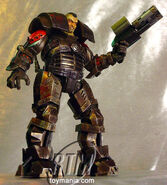 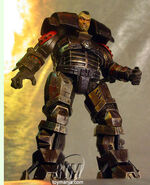 Gorge action figure
Add a photo to this gallery

Retrieved from "https://unreal.fandom.com/wiki/Gorge?oldid=34312"
Community content is available under CC-BY-SA unless otherwise noted.