The Hellbender is able to drive over fair slopes at a decent speed, but also has 600 HP. The shock combos that a Hellbender creates can kill enemies and destroy missiles such as the Redeemer and AVRiL easily. It is also good for running over enemy bots on foot.

In UT2004, the driver cannot shoot. He can only drive the vehicle around and blow the horn to call in other ally bots to enter the vehicle and operate its weapons. The shock combos do not do much damage against a Node or Powercore. Also, in UT2004, rockets can easily turn the vehicle around backwards. It gets easily damaged while facing multiple attacks at a time. In UT3, the Scorpion can easily self-destruct into the Hellbender.

3
"The Hellbender offers strong maneuverability, heavy armor and powerful weaponry. Both neutron-induction-powered weapons on the Hellbender deliver a considerable punch. The rear turret sports dual 40- megawatt plasma projectors, which despite their slower reload rate inflict considerable damage to enemy vehicles. The side turret fires EMP quanta projectiles, similar to the ASMD shock rifle. You can detonate these highly unstable spheroids with a properly placed secondary-fire. It is not uncommon to see a group of dismounted enemies devastated by this spectacular weapon, and it should be approached with caution."
– Vehicle description

The Hellbender is one of the vehicles that appears in almost every Onslaught map. It looks and drives similar to a Jeep or an all-terrain SUV, and carries three people, including the driver. If there are vacant seats in the vehicle, any player currently riding it can switch to a different seat by pressing the 1, 2, or 3 button- for the driver, the skyminer and the rear turreteer respectively.

The driver cannot control any of the weapons in this vehicle; he can do nothing more than drive the vehicle around and honk the horn to get other people's attention. However, he can run over any pesky enemies who happen to jump right in front.

The skyminer occupies the second seat and is in control of the Hellbender's side turret, which shoots "Skymines". This weapon works like the Shock Rifle but can be more powerful. The primary fire shoots slow-moving skymines which are similar to the shock rifle's shock cores. However, unlike the shock rifle which can detonate only one shock core at a time, the alternate fire allows all skymines within close proximity to each other to detonate in a chain reaction. This weapon is useful for close-range defense of the Hellbender, powernodes, or other objectives.

The third passenger is in control of the Hellbender's rear turret. Unlike the side turret, which is designed mostly for close-range defense, this weapon excels at long-distance sniping. Like the Lightning Gun and Sniper Rifle, the player can use the alternate fire to zoom the view in and out. The weapon is fired by holding down the primary fire to charge up the weapon to the desired strength, and then releasing the button. This allows for a trade-off between weapon power and recharge time.

2
"The Axon Hellbender is the spiritual successor to the High Mobility Multipurpose Wheeled Vehicles of the 20th century.

The upgraded chassis provides strong maneuverability in the field, and the up-armored neutron panels offer moderate protection to the vehicle's occupants.

The Hellbender's main strength, however, is its powerful weaponry. The rear turret focusses a devastating bolt of plasma at its target. The frond-mounted shock cannon releases floating mines of unstable plasma which can be chain-ignited by the weapon's secondary photon beam.

It is not uncommon to see a group of enemies devastated by this spectacular weapon, and it should be approached with caution."
– Vehicle description

This version of the Hellbender holds only two people, a driver that also controls the skymine turret and the rear gunner, who controls the sniper turret. The handling is markedly more responsive compared to its predecessor and the cabin is now closed, protecting its occupants from splash damage. The rear turret still does variable damage, but this is based on how often you fire it. The faster you fire, the less damage you do. Giving the weapon a few seconds of cool down between shots will greatly increase its potency.

The Hellbender works well for beating infantry to a bloody pulp and for anti-air. However, it suffers while on the defensive, against other ground vehicles.

The skymine turret is extremely powerful and can take out almost anything, including incoming AVRiL's if you time it right. The trick to using it effectively is to gauge when your shock balls are within range of your target by looking at the light they emit on the ground. Releasing a string of skymines and detonating the first one will concentrate the damage in a small area while detonating the one you fired last will make most of your skymines detonate somewhere you don't want them to. Effective use of skymines requires a cool head and good timing, which isn't exactly common given the circumstances.

A common advanced technique is to fire your first skymine over your target and then fire a group of them at whatever it is that needs to explode. Detonate the skyward skymine just before the group hits. The result is a concentrated explosion that if timed well can deal massive amounts of damage.

The Hellbender can also detonate groups of enemy skymines, provided you can hit one of them. 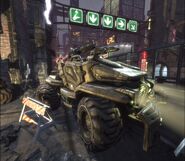 Decoration at DM-Gateway
Add a photo to this gallery

Retrieved from "https://unreal.fandom.com/wiki/Hellbender?oldid=33074"
Community content is available under CC-BY-SA unless otherwise noted.