Unreal Wiki
Register
Don't have an account?
Sign In
Advertisement
in: Item stubs, Stubs with tasks, Items,
and 16 more

The Invisibility is an item appearing in the Unreal series.

When used, this item will render the player invisible to other lifeforms. The player will remain invisible until the item is deactivated or until the player fires a round from his/her weapon.

50s
"Makes you temporarily invisible. But remember, even the wind can be heard."
– Unreal manual

Unlike in later games, the Unreal Invisibility pickup makes a player entirely invisible. For other players it seems like projectiles materialize out of thin air. However, once found by an enemy or bot, they somehow seem to know where you are. Invisibility prevents sight, but it doesn't prevent noises made by players.

1m40s
"A special cloaking device is located somewhere in each level. Any player who gets it (and activates it) becomes partially invisible. When a cloaked player is killed, his killer becomes cloaked and all other cloaking devices are deactivated. From that point on, only one player at a time can be cloaked."
– RTNP manual, description of the Cloak Match mode.

The Cloaking Device is a pickup that is a combination of Invisibility and Jump Boots, and therefore is generally more useful than the Invisibility. When a player takes the Cloaking Device, he becomes partially invisible and gains an ability of jumping higher with greatly increased air control, even 120 times more. Offline, bots notice the cloaked player only if he starts shooting. The cloak effect lasts for a very long time and even longer than it takes for another two Cloaking Devices to respawn. This pickup is automatically added to the inventory of each player in Cloak Matches.

In UT, the Invisibility pickup makes its owner hard to see by replacing the player and weapon skins with a mostly transparent texture with moving sparkles. This effect is most efficient if the player is in front of a brighter wall in a less lit area.

When picked up, the Invisibility leaves only faint blue shadows at the player's location, which are extremely hard to see. You almost have to know that there's an invisible player to see him or her.

An important change from previous games is, that a Shield Belt carried by the player is no longer made invisible as well, but still glows its usual bright orange-yellow color. This makes it pointless for a shielded player to pick up the Invisibility, unless he or she specificly wants to prevent an opponent from taking it.

Like other power-ups, the Invisibility is dropped when the player dies or gets hit by the Impact Hammer's EMP mode. 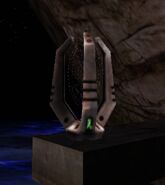