Unreal Wiki
Register
Don't have an account?
Sign In
Advertisement
in: Item stubs, Stubs with tasks, Items,
and 12 more

The Jump Boots (also known as the AntiGrav Boots) are an inventory item in Unreal.

When used, this item will allow the player three enhanced jumps, allowing the player to jump much higher than normal, and while active, also increases protection from fall damage.

3 jumps, or after 3 minutes
"Activating the boots enables you to jump much higher than normal. Once picked up, the Boots only last for a short period of time, so take advantage of them while you can."
– Unreal manual

The Jump Boots are usually present when hard-to-reach places are nearby. If the boots are not used within a certain amount of time, the boots will begin draining and will eventually become useless.

There are also Super Jump Boots, an improved version of the Jump Boots, with an infinite charge, only found at The Source.

3 jumps
"Picking up the boots enables you to jump much higher than normal. While in the air you have limited control over your flight trajectory. Once picked up, the boots last for 3 jumps, so take advantage of them while you can."
– UT manual

The Boots allow the player to jump much higher than normal. Additionally, if the boots are active, players take less fall damage and can sustain higher impact speeds than usual. The boots can be used for three high jumps and automatically wear off after landing from the third jump. They respawn every 27.3 seconds.

3 jumps
"These boots can be used to propel the wearer to great heights. These boots only consume power when used, so they are limited to a number of jumps rather than a set period of time. They are activated by double-jumping."
– UT3 manual

3 jumps
"Tap jump twice to activate - a pair of Jump Boots has 3 charges available. Besides being extremely powerful and versatile for traversing large height differences they also protect you from falling damage."
– Tutorial level 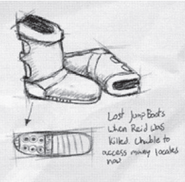 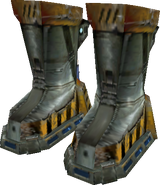