This article is about the Unreal and RTNP monster class. If you're looking for the Unreal Tournament 3 team and version of the race, you might want to check Krall (UT3).

"Employed by the Skaarj as hunting assistants. Somewhat limited in intelligence, but then mindless slaughter doesn’t require a whole lot of thought. Their concussion staffs can blast you backward from a considerable distance."
– Unreal manual

They are a brown, lizard-like species with large spikes that are more primitive and feral than humans. Their home planet is unknown. They were used by the Skaarj, and then by the Necris, for the pacification of newly conquered planets such as Na Pali.

It is a testament to their fighting skills that the Skaarj use them as warriors rather than slaves. The Krall social structure is too fragmented for them to become a major force on a large scale, but as individual fighters, they are truly formidable.

Aside from the standard Krall, there is a more powerful variant called the Krall Elite.

In their original Unreal appearance (and later derivative incarnations), the Krall are relatively human-like.

During Unreal and Return to Na Pali, the Krall are enslaved by the Skaarj who used them as soldiers (it is unknown whether they replaced or complemented the Izarian fighting force). Over time, the Krall grew contented fighting for the Skaarj, though threads of distaste with the Skaarj and each other, low-level dissent, and impatience to get back home are evident in some journal entries in the Bluff Eversmoking and Dasa Mountain Pass levels of Unreal. The Krall on Na Pali are armed with concussion staffs which can fire energy bolts and can be used to hit nearby enemies. At close range, they can use their staffs to knock the player back. After losing their legs in combat, the Krall will crawl towards their enemy on their hands while still firing energy bolts. There are also the Krall Elites, recognizable by patches of blue body paint. The Elites are stronger fighters and are better at dodging enemy fire. They are also equipped with more powerful concussion staffs.

In UT2004, both regular Krall and Krall Elite appear as enemies in Invasion matches. Since they use their original vertex meshes instead of skeletal meshes, their appearance is identical to that in Unreal.

In UT3, the Krall are depicted much more like vicious, yet intelligent, animal predators. According to the Unreal manual, Kralls are 7 feet tall and weigh 285 lbs. 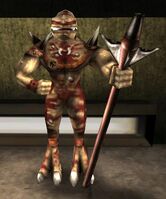 A Krall, pictured in Unreal
Add a photo to this gallery

Retrieved from "https://unreal.fandom.com/wiki/Krall_(enemy)?oldid=25630"
Community content is available under CC-BY-SA unless otherwise noted.