The Lesser Brute is an enemy in Unreal and Unreal Mission Pack: Return to Na Pali.

They are the first real enemy Prisoner 849 encounters on the planet Na Pali. This beast has yellow shoulder pads, pants, and ammo clips covering their brown skin. They are very powerful aliens armed with dual rocket launchers. The Lesser Brute attempts to fire these hand launchers when at far to medium range. As the Lesser Brute gets closer, it attempts to charge the player and whack the player with one of the guns. The Lesser Brute's weakness is that it doesn't have much of a defense to balance with its offense. As it walks or charges straight at the player, it is an easy target to fire upon. The Lesser Brute also does not have a large amount of health, as it is fairly unarmored and can be taken down rather quickly, even with an Automag or a Dispersion Pistol.

Lesser Brutes are perhaps genetic experiments created by the Skaarj, as they were said to be engineered by the superior alien race. They are made to be enforcers and to slaughter those who go against the Skaarj rule of Na Pali.

Of the three classes of Brutes, the Lesser Brute is the smallest (only one head taller than the player), and it wears the least amount of armor, wearing not much more than shoulder pads and ammo around its arms/chest. It uses different (and less harmful) rocket launchers than the other brutes, and it's not resistant to any kind of damage (due to its lack of armor). It has one small advantage over the other Brutes though, as it is slightly quicker than the others. 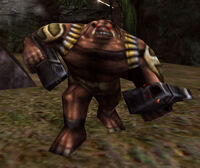 Retrieved from "https://unreal.fandom.com/wiki/Lesser_Brute?oldid=25632"
Community content is available under CC-BY-SA unless otherwise noted.