Unreal Wiki
Register
Don't have an account?
Sign In
Advertisement
in: Character stubs, Stubs with tasks, Spoiler pages,
and 15 more

Matrix is a character in the Unreal series.

Matrix is the leader of Liandri's team of cybernetics in Unreal Tournament 3. He is believed to be either a super-advanced machine or modified human being. He is fought by Reaper and his team, although little is revealed about his origins. Though the UT3 manual and website say that he might have been a "flesh and blood human" once but he "got the ultimate upgrade" courtesy of the Liandri Corporation. 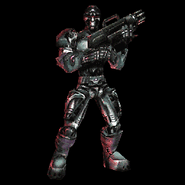