If you're looking for the Stinger Minigun, you might want to check Stinger.

The Minigun has remained more or less unchanged throughout the games: Primary fire shoots out a fast stream of inaccurate bullets that do light damage, while secondary fire shoots out more accurate and damaging bullets, but the rate of fire is severely dropped. In Unreal and Unreal Tournament these firing modes are swapped.

50
50
200
"Like the Automag, the MiniGun uses gunpowder-based bullets for ammo. However, it has a much faster rate of fire and a much greater ammo capacity.

The Unreal version features two tri-barrels that spin with each other, the weapon should be used carefully since it shares ammo with the Automag and uses it up quickly. You should be often picking up boxes of 50 bullets with this, as it replenishes ammunition. Tapping the primary fire button once makes the Minigun shoot an accurate 5-shot burst, whereas holding it down would continuously fire it. The secondary fire mode fires more bullets at the expense of accuracy.

As simple as it is dangerous, the Minigun features a rotating barrel assembly and an unmatched rate of fire. If the primary fire isn’t fast enough for you, try the much faster (and less accurate) secondary fire. Good aim is the key to mastering the Minigun. With a little practice you’ll be reducing your opponents to helpless bullet catchers at every opportunity. The ammo supply is displayed on the top of the weapon."
– UT manual

Classification
Gatling Gun
Primary Fire
Bullets are sprayed forth at a medium to fast rate of fire and good accuracy.
Secondary Fire
Minigun is twice as fast and half as accurate.
Techniques
Secondary Fire is much more useful at close range, but can eat up tons of ammunition.

In Unreal Tournament, the Minigun returns, now looking a lot more like a gatling gun. It features a rotating barrel composed by five tubes, and is now green in color, except for the entire barrel, which is grey.

"%o was mowed down by a barrage from %k's minigun."
"The Schultz-Metzger T23-A 23mm rotary cannon is capable of firing both high-velocity caseless ammunition and cased rounds. With an unloaded weight of only 8 kilograms, the T23 is portable and maneuverable, easily worn across the back when employing the optional carrying strap. The T23-A is the rotary cannon of choice for the discerning soldier."
– Weapon description

The UT2k series reuses the UT model and concept with slight changes. Its primary fire mode shoots rapidly but inaccurately, it being a lot more effective at close range. The secondary fire mode shoots a slower but highly accurate stream of bullets which also cause more damage.

Unreal Championship's version of the Minigun does not really differ from the UT2k series' Minigun in terms of functionality. Its design is different, however.

In UT2004 the Minigun no longer imparts momentum to target players, but deals out a bit more damage than the UT2003 version. The momentum was removed to prevent lockdown.

The Minigun returns, along with the Stinger.

"The minigun can be hard to use due to tickrate.

The minigun fires more or less bullets depending on the tickrate of the server. A tickrate of 20 will give you around 10 bullets per second, while increasing to 25 could theoretically give you 12.5 bullets per second. a 25% increase in damage. This is a theoretical value. The tickrate is not perfect on the server, it will vary a bit. But it's interesting enough as it shows on the picture. Different tickrates can be used to manipulate the power of the minigun. This is one of the reasons tickrate should stay at a default of 20 to avoid minigun being overpowered."
– TNSe[1]

"The minigun does a lot of damage to a lot of enemies in very little time. It’s amazingly fast fire rate makes it most useful for close-quarters combat.
It’s not, however, a very accurate weapon. Don’t use it against distant enemies. It also takes a moment to rev up to full firing speed—those warm-up milliseconds can be costly.

The minigun’s primary fire is faster than its secondary fire, but use it and your ammo will last longer. Use the primary fire at medium to close range—an enemy who is, say, 10 to 30 feet away. The greater the distance, the more inaccurate the gun.

The minigun's secondary fire is slightly slower than the primary fire, but each of the shells inflict slightly more damage on their targets. This will help you extend the lifetime of each clip, which is a huge help in big battles.

Maps with tight corridors or enclosed defensive points are prime minigun territory. It’s awesome used against nearby opponents, and second only to the link gun for defensive use and use in tight areas.
Maps that are flat and open aren’t the minigun’s forte. It’s too inaccurate for use at range.
Charge it fully, and start pulling the trigger before your enemy is fully targeted. By the time you target your opponent, the gun is at maximum power. You can clear rooms in Double Domination, Bombing Run, and Capture the Flag by spraying them with secondary fire from a fully powered minigun."
– Unreal Championship Prima's Official Strategy Guide 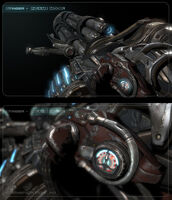 "The chain gun is still pretty much the same, although with the new body physics (which I will discuss shortly), it will now remove limbs much more effectively."
– Unreal Playground[2]