Unreal Wiki
Register
Don't have an account?
Sign In
Advertisement
in: Faction stubs, Stubs with tasks, Factions,
and 12 more

If you're looking for the UC, UT2003 and UT2004 team, you might want to check Nightmare Black Legion.

The Black Legion is a team appearing in the Unreal Tournament series.

They are a team of Necris competing in the Grand Tournament.

In the original Unreal Tournament continuity the Necris are a mysterious alien race. The Black Legion team is fully comprised of these alien warriors, several of whom which are drawn from a secret society known as the Phayder, which is described as being comprised of cultists and assassins.

In the revised continuity introduced with Unreal Championship 2 and Unreal Tournament 3, the Necris are humans who have been reanimated using a nanotechnological substance called "nanoblack" by the Phayder Corporation. Highly boosted with inorganic elements, the Necris warriors are able to use nanotechnology like tentacles and vehicles, which can even drain off the energy from their targets

No
"A powerful team of Necris Phayder assassins that seek to dominate the Tournament. By destroying Xan Kriegor, the corrupt Tournament champion, the Legion believes it can take control of Liandri operations."
– Team description

No
"After an absence of several years, the Necris are preparing a return to the Tournament."
– Team description

If you're looking for the rest of the team, you might want to check Necris Black Legion/Character cards.

No
"The secretive Phayder Corporation developed the Necris process to produce this elite group of assassins."
– Team description

In UT3 they're led by a High Inquisitor, Akasha and play a major part in the story mode, what with them commanding the Krall and fighting the Ronin after they attack several areas in "Calculated Losses", then in "Disposable Assets", Reaper decides to send his team with him and chase and fight them on Omicron 6, the Necris homeworld. 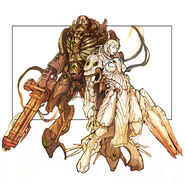 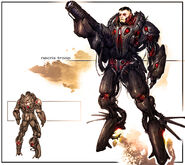 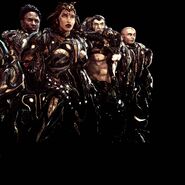