"Onslaught 8"
by Will Nevins

"Stationed at 24,000 feet and veiled behind blinding fog and constant snow, Arctic Stronghold provided the perfect place to conduct unsanctioned military experiments for use against the Skaarj. Restructured for Onslaught, this arena allows several paths to your enemy, and countless paths to death for the foolish or unwary."
– Map description
ONS-ArcticStronghold (whose full name is Arctic Stronghold) is a map appearing in Unreal Tournament 2004 .

As the name gives away, this map is set in a small snowy valley with a dense blue fog. It's a bit of a compact Onslaught map with plenty of z-axis gameplay because of the many rocks and cliffs. The map is slightly asymmetrical, but the bases are built exactly the same. There's a bridge in the very center of the map, acting as the choke point of it. The Red Base is located at the Northeast corner of the map, while the Blue Base is located in the Southwest corner.

The following named areas are featured in the map:

There are five nodes in this map:

Both the Blue Prime and Red Prime nodes are located in roads near their respective bases. These nodes house an Energy Turret, a Manta and a Scorpion each.

Continuing from the Red or Blue Prime node going upwards to the west, at the top of a risc, players will find the West node. From these same nodes, but circling the snow mountain at the center-east part of the map, players can find the East node. These nodes house each an Energy Turret, a Manta and a Hellbender.

Finally, going to the center from the Blue Prime and Red Prime nodes, players will find a bridge. Below it there's the Center Node, which holds the biggest cache of the map with four energy turrets, a Raptor, a Goliath and a Scorpion.

The open layout of the field is excellent for sniper support when raiding nodes. Shock Rifles and Sniper Rifles can be great tools for distant takeouts, and even keep damage on the node to prevent reinforcements from spawning. Use the cliffs via Raptors, Manta jumps, or the Low-Grav/Quad Jump modifiers to your advantage in gaining a better nest.

Having trouble with a node? Due to the triple-path of the default layout, you can easily cut off one of the lateral or center nodes by attacking the node next to their base.

Because of the openness and many paths to nodes, defense is incredibly difficult. Be sure to defend from the intersections that lead to a node, so that you are fighting the opponent before he can even attack the node itself. This is especial to the node next to the opponent's base, as the opponent has the advantage of close-spawning firepower.

Be sure to defend the bridge. Not only is the node important in the Choke Point layout, but it is also a major path going base to base for the vehicles. Be wary of drop raids from Mantas, and infantry when Low-Grav/Quad Jump make long falls an easy feat. 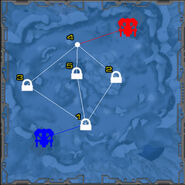 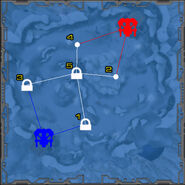 Link Setup: Choke Point
Add a photo to this gallery

Retrieved from "https://unreal.fandom.com/wiki/ONS-ArcticStronghold?oldid=30116"
Community content is available under CC-BY-SA unless otherwise noted.