"The road ends here. Only the jutting spires of age old mesas guard you from the elements... and in this case the elements are tank shells."
– Map description
ONS-Aridoom (whose full name is Aridoom) is a map appearing in Unreal Tournament 2004 . It comes with the UT2004 XP Bonus Maps.

Aridoom takes us to a small barren desert. The architecture is steampunk-inspired, with lots of bare steel and concrete with a bit of a desolated look. Large rock-formations shape the terrain and the routes across the sandy map. A large defunct road splits the map into 2 sections and, along with the large construction, serves as the map's main landmark.

The node layout is rather simple, with only 3 nodes in a single line between the 2 powercores. Furthermore, Aridoom has only a few valuable pickups and no flying vehicles (even though the map does have flyingpathnodes: Actors used to make bots fly vehicles along certain paths). 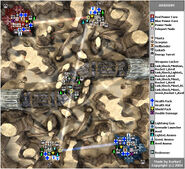 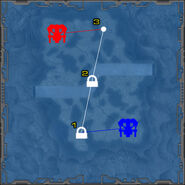 Retrieved from "https://unreal.fandom.com/wiki/ONS-Aridoom?oldid=31942"
Community content is available under CC-BY-SA unless otherwise noted.