"Onslaught 3"
by Will Nevins

"Don't be deceived by the apparent simplicity found in this frozen waste. Although it's among the smallest arenas for Onslaught, Frostbite is defined by frenetic pace and pitched battles."
– Map description
ONS-Frostbite (whose full name is Frostbite) is a map appearing in Unreal Tournament 2004 .

The smallest Onslaught map alongside ONS-Primeval, it's set on an arctic setting. It follows a ">"-pattern, with both bases located at both extremes, and the center node located at the turn. The bases are located in the Northwest Lake (Blue) and Southwest Lake (Red). Both bases are connected to the Center Node (located at the Central Lake) via the Northern Canyon (Blue) and Southern Canyon (Red). Additionally, there are two extra nodes at the Northeast Canyon (Blue Prime) and Southeast Canyon (Red Prime). Finally, there's a tower located at the Central Mountain in front of the Center Node ruins, which holds a powerful tool.

The "Bonus Vehicles" version of the map, available by installing the ECE Bonus Pack, replaces one Scorpion at each base with a Paladin, and the Central Lake Manta with a Cicada. 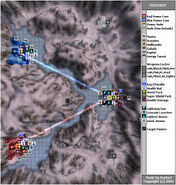 Easter Egg guide with the trees that needed to be bump. 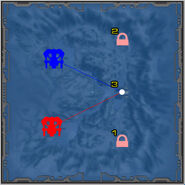 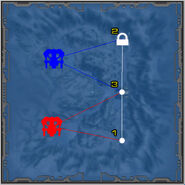 Link Setup: Side Nodes
Add a photo to this gallery

Retrieved from "https://unreal.fandom.com/wiki/ONS-Frostbite?oldid=34387"
Community content is available under CC-BY-SA unless otherwise noted.