"Soaring 3 miles above Earth's surface, Icarus Plaza was designed to be the ultimate residential precinct. But like its namesake, ambition for the project exceeded caution. Even before the project was completed, significant structural flaws were detected and the buildings were abandoned."
– Map description
ONS-Icarus (whose full name is Icarus Plazax) is a map appearing in Unreal Tournament 2004 . It comes with the UT2004 Ownage Maps.

The map takes place atop of several towers linked by way of roads, with the exception of two standalone towers near each team's bases. The bases are located at the North (blue) and South (red) towers. Left of the Blue tower, there's the Blue Leviathan tower, which isn't connected to the rest of the map, except by way of a jumppad and a teleporter going from this tower to near the Blue base. The Red Leviathan tower is similar to the Blue Leviathan, except that obviously is located at the right of the Red base, and the respective tele and jumppad gets the user to near the Red base. The titular tower spans through four of them, holding the nodes, and a lot of the vehicles and strategic positions.

There are six nodes in the map:

"This is a stunning map that didn't make it in time for ship. However, since we had a couple of weeks from when the game was handed off we were able to take a bit more time to polish it up and have it ready day 1 for the very first ut2004 OWNAGE map! Icarus is a Morpheus style "fight 3 miles up" style of level. It features wheeled vehicles jumping from building to building, Raptors flying through interior halls, and a pair of very angry trapped Leviathans. Download this map now and add it to your rotation!"
– UT2004 Ownage Maps tab 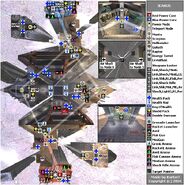 Retrieved from "https://unreal.fandom.com/wiki/ONS-Icarus?oldid=33546"
Community content is available under CC-BY-SA unless otherwise noted.