"THIS SATURDAY, ONE DAY ONLY, AT THE M-M-MONSTER VALLEY ARENA, WITNESS THE AAAAWESOME SPECTACLE OF ONSLAUGHT TOURNAMENT COMBAT!!! TWO TEAMS AND 65 TONS OF BALLS TO THE WALL GUN SLINGING VEHICULAR MAYHEM! BE THERE FOR THE FLAMING HOOPS, THE MONSTER JUMPS, THE HALFPIPE OF BLOOD, AND THE INSANITY OF THE 150 METER TALL TOWER OF DOOM! BE THERE!!!"
– Map description
ONS-Tricky (whose full name is Tricky) is a map appearing in Unreal Tournament 2004 . It comes with the UT2004 ECE Bonus Pack.

This map is set in a large stunt show arena. There are various boost ramps for wheeled vehicles. Almost all of them work for the Scorpion, Hellbender, SPMA, Paladin and even the TC-1200. Only three of the boost ramps are limited to Scorpions and Hellbenders: The one on the top of the tower and the two quarter pipes left and right of the Energy Turret defending the central power node. Some of these boost ramps have pyrotechnics attached to them.

Another feature of this map is its use of the Vehicle Stunts and Vehicle Pickups mutators. These are always enabled when playing this map. A few map features, like the Double Damage powerups floating in burning rings can only be reached via boost ramps, using a vehicle stunt jump. 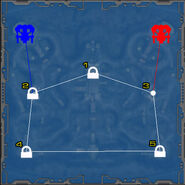 Link Setup: Default
Add a photo to this gallery

Retrieved from "https://unreal.fandom.com/wiki/ONS-Tricky?oldid=30161"
Community content is available under CC-BY-SA unless otherwise noted.