Powerful rounds of burning plasma, a high rate of fire and a vicious secondary attack make the Pulse Blaster a very popular mid-range weapon. The primary fire riddles targets with glowing bursts of plasma; the secondary fire emits a steady stream of the incandescent yellow substance. The pulse blaster uses clips containing 50 rounds, which must be replaced after they are emptied. The number of rounds remaining in the current clip is displayed on the weapon."
– UT manual

The Pulse Gun is a weapon in Unreal Tournament.

Classification
Plasma Rifle
Primary fire
The Pulse Gun's primary fire projectiles are fast-moving green orbs of plasma. It can be quite dangerous in close range fights, long range spamming or when retreating around corners, due to its fast fire rate compare to other projectiles weapon in UT.
Secondary Fire
A bolt of green plasma lightning is expelled with limited length. However, it is much more effective at medium range than the primary fire, owing to its hitscan nature and lockdown effect, which prevents players from being able to dodge nor jump away.

This weapon fires a stream of green plasma bolts. Although the bolts themselves travel slowly compared to most of the other guns, this weapon has a large rate of fire. Its secondary fire consists of shooting a stream of plasma energy which the weapon's wielder can easily land on opponents, giving them half-damage. The downside to the secondary fire is that ammo is consumed at double the rate. It is also only effective up to a certain range; the secondary fire is useless if the player is too far from the target.

The Pulse Gun's primary fire launches plasma projectiles at a rapid rate, and its secondary fire shoots a constant beam of plasma, though this beam is of limited length.

The beam is divided into 10 segments of 81uu length. Each of them does a fixed damage of 10 health on first contact with the player. So if you move towards an opponent and back away from him you are doing a bit more damage than usually. (imagine you got a saw in your hands, which you have to move forward and back all the time)

Note that the segments 'forget' their last target as soon as you switch to another segment, so the 10 damage on 1st contact always refreshes. That`s why the best method is to switch fast between 2 segments, but you'd have to know the exact segment borders which are difficult to see. But theoretically you could do an insane amount of damage with this method.

"This resembles the hyperblaster from Quake II. Its rotating barrels shoot out blasts of fire energy that melt opponents in their tracks."
– IGN, UT[1] 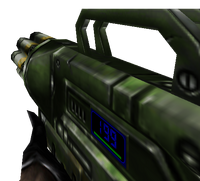 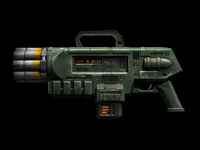