The Scorpion looks like a one-seater convertible with a roll cage on it.

Its primary fire varies from game to game. The alternate fire allows the driver to deploy a pair of blades on the sides of the vehicle. One slice into a person means instant death. If a blade collides with objects or terrain, it will snap off. Therefore, the driver must be careful while driving with the blades open, or he will eventually end up with no blades on the actuator arms.

Fires Bolas/Extends cutting shears
"Offering little in the way of armor, the Scorpion is effective against infantry and as a light, fast combat support vehicle. A rear-attached plasma ribbon emitter fires a string of plasma cores bound together by cohesive magnetic force. These cores wrap around enemies or vehicles and detonate. The Scorpion is fitted with twin sling arms embedded with three industrial-grade steel shears with zero-G forged edges only an atom's width in thickness. The sling arms snap out on command and effortlessly cleave through any body armor with ease, leaving perfectly severed heads and torsos in its wake. Being so small and lightly armored, the Scorpion is vulnerable to most other vehicles, and heavy infantry fire."
– UT2004 manual

Like many of UT2004's vehicles, the Scorpion has two modes of attack.

With the primary fire, the player can fire a green energy bola. The energy bola continues floating straight through the air until it comes into contact with a person, vehicle, object, or terrain, after which it will stick to it. Seconds later, the bola disappears, along with part of the enemy's health. The longer the fire button is held down, the larger the energy bola becomes and the more damage it deals. Because the time in-between weapon shots is short, it can sometimes be advantageous to fire off multiple small energy bolas rather than one large one.

Fire homing spheres/extend blade arms/boost/self-destruct
"The Scorpion L2 buggy shows vast improvements over previous generation models. The characteristic sling blades are now forward mounted under the chassis for improved accuracy and feature a photon-charged self-sharpening edge that will cleave through all known types of body armor. The unreliable bolo mechanism has been replaced with a mortar that fires homing spheres of charged anti-matter. The tail of the vehicle has been fitted with two afterburning propulsion units capable of boosting the already nimble vehicle up to speeds over 100 KPH in less than a second. At this top speed, the fuel lines burn so hot that they can actually ignite the Tarydium in the compression chamber, causing a chain reaction that will turn the Scorpion into an explosive meteor. Some drivers have even been known to use this "flaw" as a highly effective weapon against larger, better armored targets. Luckily, the steering column has been encased within a protective carapace that will auto-release and eject the driver should such an engine meltdown occur."
– UT3 manual

The Scorpion's new primary weapon is a large sphere that homes in on all kinds of hovering and flying vehicles, including players on the Hoverboard. This, as well as the two blade arms, that can be extended in front of the vehicle, make the Scorpion an excellent anti-infantry weapon. At least until the infantry pulls out the AVRiL, as the Scorpion can survive only one normal AVRiL hit.

The sphere is one of the most mysterious weapons in Unreal Tournament 3. Spheres are launched from what looks like a machine gun turret, they are very light and get attracted by hovering vehicles. The reason for this behaviour was never explained. Furthermore, if the sphere falls into the water, it doesn't fall down, but instead, just like the Bio Rifle's sludge, floats on top of the water. As they explode after quite a long time and the fire rate is good, it is possible to plant "water mines", similar to what the Bio Rifle does on land.

The Scorpion's new feature is a rocket booster that not only quickly accelerates the vehicle, but also turns it into a dangerous projectile. While boosting, the Scorpion's steering abilities are very limited. If leaving the Scorpion in the middle of a boost, the driver is ejected in a high arc and the vehicle detonates when it hits a wall, player or other vehicle. Killing an opponent in such a maneuver gives the player who "launched" the Scorpion a "Bullseye" reward. On the other hand, if a Goliath or Paladin destroys a speeding Scorpion with its main cannon, the Goliath/Paladin driver gets the "Eagle Eye" reward. The Scorpion's suicide attack causes 600 points of damage, which is enough for taking out a Goliath, Paladin or Hellfire SPMA after an AVRiL hit or an entirely intact Nemesis or Nightshade.

While extended, the blades can break off if they hit something hard, like a wall or other vehicle. Usually the blade arms are automatically retracted when the driver leaves the Scorpion. However, if the driver ejects from a speeding Scorpion while the blades are extended, they stay extended and provide additional reach to take out infantry on the way to the actual target. Going against the Scorpion

A Scorpion is easily destroyed with two AVRiL hits, or just a single one if you're amped. Just make sure you don't get in the way of its blades or anti-matter spheres. Also, stay off the Hoverboard and don't try to fight it with a Manta or Viper. A flying vehicle might work, as long as you stay out of the range of the Scorpion's sphere launcher.

"The scorpion has apparently been overhauled since the last time we saw it. It's still a single-person vehicle that looks like a dune buggy, but it now has a new arsenal. When we saw the game in September, it had a single, primary weapon: a grenade launcher. It appears that Epic is still working on the new primary weapon, which appears to be placeholder at this point, but the new secondary weapon seems pretty interesting. In keeping with the new game's theme of finding ways to brutally kill opponents with vehicles, the scorpion has two long blades that spring out from its sides that will instantly kill anyone in its path. The scorpion's speed ensures that you'll be able to use these blades to good use. "
– Gamespot[1]

"All of the old UT2004 vehicles are of course present, but many have new abilities that will no doubt please. For instance, the Scorpion now has a power boost ability that increases speed dramatically in a straight line, and if the player is brave enough to eject themselves from it at the same time it will speed forward into a kamikaze fashion."
– PlanetUnreal[2] 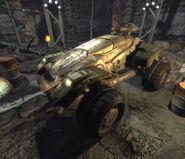 Retrieved from "https://unreal.fandom.com/wiki/Scorpion?oldid=35182"
Community content is available under CC-BY-SA unless otherwise noted.