The Skaarj Scout is a creature found in Unreal (video game) and Unreal Mission Pack: Return to Na Pali.

The Scout is the weakest of the Warrior-class Skaarj, having the least amount of health. For this reason, they are the best type of Skaarj for an inexperienced player to practice on to understand how the Warrior class fights. They are the first type of Skaarj encountered in the campaign. The player first meets one when they get locked into a hallway in the Rrajigar Mine. Killing them is rather easy, as long as they have a hitscan weapon such as the Automag.

The Skaarj Scout has a yellow-green skin and is covered by a red suit of armor. They have various small grey pieces of armor such as a crotch pad, anklets, wristbands, and thigh bands.

They appear less frequently in Return to Na Pali, though they make several appearances in the Foundry Tarydium Plant. 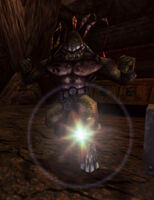 A Skaarj Scout in Rrajigar Mine 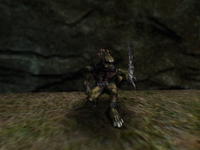 A Skaarj Scout
Add a photo to this gallery

Retrieved from "https://unreal.fandom.com/wiki/Skaarj_Scout?oldid=17944"
Community content is available under CC-BY-SA unless otherwise noted.