"Instinctive hunters with extraordinary physical strength and the ability to use numerous weapons. Their huge retractable claws can literally slice their prey to pieces. To make matters worse, there are many types of Skaarj. And some of them wear armor."
– Unreal manual

The Skaarj Warrior is an enemy in Unreal.

They are a Warrior-class Skaarj which are the most common enemies encountered by the prisoner while escaping from Na Pali. The Skaarj Warrior is a green lizard-like being with Raziks on their wrists, colored a light green with a gray chest and no apparent armor. They are the standard Skaarj, having a fair amount of health, speed, and damage.

The Warrior species is stronger than the Scouts, and tends to be a little more aggressive. They appear to be about 7'10" tall at the top of the head, not counting the trademark dreadlocks. From the Mothership Core onwards, Warriors are obsolete. There are also two larger individuals that can be seen imprisoned in the Mothership Lab. 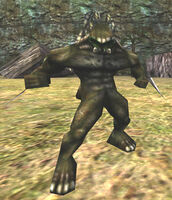 A Skaarj Warrior
Add a photo to this gallery

Retrieved from "https://unreal.fandom.com/wiki/Skaarj_Warrior?oldid=15511"
Community content is available under CC-BY-SA unless otherwise noted.