The Squid is a underwater monster that was cut from Unreal.

The Squid is similar to an Earth squid, but has only six arms instead of eight, and no tentacles at all. The creature is mostly dark green, but has red eyes and suckers.

The Squid attacks its enemy by advancing and flailing its arms at it. After this attack, the Squid retreats to another position while releasing black oil which makes it slightly harder to see. After a while, the Squid will begin another assault.

If for any reason the Squid itself ends up outside of the water, it will jump like mad, trying to return to its own environment. Unlike the Devilfish, squids don't die after long periods of time on land. 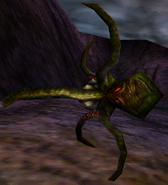 Squid in water
Add a photo to this gallery

Retrieved from "https://unreal.fandom.com/wiki/Squid?oldid=37442"
Community content is available under CC-BY-SA unless otherwise noted.