Unreal Wiki
Register
Don't have an account?
Sign In
Advertisement
in: Item stubs, Stubs with tasks, Items,
and 19 more

When picked up, this item grants a player 100 health points up to a maximum of 199, ignoring the default 100 capacity. It's often placed as a powerup found in hard-to-reach places, hidden corners, and on occasion, dangling above hazards.

With the high amount of health given, it is placed more frequently in multiplayer, and like the Shield Belt, in hard-to-reach, dangerous, or hidden locations. With the addition of Health Vials and a lowered maximum health of 199, the Super Health is less useful than in Unreal, but is still used by players with low health to quickly re-join a fight.

100
"Boosts your health by 100 units. Don’t waste Superhealth by using it when you are close to full health (200 units). Wait until you need a big health boost before you pick it up. (Note: you can not exceed 100 health without one of these.)"
– Unreal manual

The Super Health Pack is the most powerful health pickup in the game. It is a container of blue fluid that, when consumed, can give the user a hundred more health than they previously had up to a maximum of 200. It is impossible to exceed 100 health without the use of a Super Health.

100
"A new lease on life, 100 health points up to the maximum of the character species."
– UC manual

Health
"Boosts the combatant's health to the maximum."
– UC2 manual

100
"The massive 'Keg O' Health' completely heals the body. It can take the body's health beyond normal limits, making the soldier able to withstand even more punishment before untimely death."
– UT3 manual 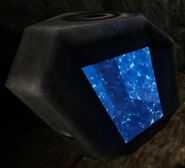