The Tentacle is an enemy in Unreal and Unreal Mission Pack: Return to Na Pali.

The Tentacle is a creature native to the planet of Na Pali. It consists of a base that is usually found connected to a ceiling and three tentacles protruding from the base. At the center of the three tentacles is a red mouth to consume any prey it manages to kill or capture. The back of the base holds a great number of suckers to allow it to stay attached to a ceiling. The Tentacle attempts to ambush its prey by remaining dormant until a creature gets within its firing range. While dormant it keeps its tentacles furled towards the base in an attempt to blend in with the natural environment of the planet. They also attempt to hide in darker corners or just after the entrance to a larger room so they will not be easily noticed.

The Tentacle makes a growl when it is ready to attack its prey and rapidly unfurls, leaving the three tentacles hanging from the base. The left and right tentacles flap around helplessly while the central tentacle fires small thorns at its prey. If the creature gets too close it can attempt to use the tentacle to whack the prey back so it can begin firing upon it once more. The thorns are very slow and can be easily dodged, while the Tentacle itself does not have much health and can be killed in a couple shots. It thus relies on the element of surprise to injure the player or anything else that treads in its path.

When killed, the Tentacle's suckers releases its grip from the ceiling and the base drops to the ground with the rest of the body. The releasing of the suckers is extremely audible while being mixed in with the sounds of the creature's death. Sometimes it will leap towards the player while dying, causing a slight shock factor to unsuspecting players. 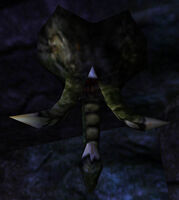 Retrieved from "https://unreal.fandom.com/wiki/Tentacle?oldid=24788"
Community content is available under CC-BY-SA unless otherwise noted.