Thunder Crash (sometimes written ThunderCrash, and mocked as Thunder Cash) is a team from the Unreal series.

Thunder Crash is a team of human Liandri Grand Tournament competitors with a military theme. Thunder Crash armor is green, sometimes accented with gold, and often features the image of a bird of prey or wings.

Although led by Othello in the original Unreal Tournament, later entries of the franchise have featured Malcolm as their leader. The team is well known throughout the UT series and the only team that is represented consistently by at least one member in every Unreal Tournament and Unreal Championship title.

Thunder Crash is well known throughout the universe, mostly because of their success in the Liandri Grand Tournaments.

In Unreal Tournament 3 it is implied they can be hired, but their services cost a lot, therefore the team is often called "Thunder Cash" behind their backs. It is not known whether Thunder Crash are mercenaries or it's NEG that decides where to send them, taking the money as a bonus. Cast member Othello is not related to the team's own Othello.

During the Corporation wars Thunder Crash forces fought for the New Earth Government in at least one instance. It is not known if they were hired, or are fully owned by the NEG.

If you're looking for the full character roster, including other characters who use the "Marine" costume, you might want to check Thunder Crash/Character cards.

Yes
"Thunder Crash is the current big city favorite, sporting a calculated balance of strength and style, they always manage to crush the opposition and look good at the same time."
– Team description

No
"Following his well publicized break-up with long-time teammates Brock and Lauren, Malcolm has returned to lead his old team, Thunder Crash. Malcolm is currently rehabilitating an injury sustained in last year's championship match, but he is expected to be healthy in time for the Tournament Finals."
– Team description

Thunder Crash makes a comeback in UT2004 as one of the three finalist teams, of course, standing in your way to fame and victory. A balance of aggression and speed, the team can be nailed by outright offense. If this team is your opponent in the Finals, them you will have a 1-on-1 grand final match against Malcolm.

Backstories for members of the Thunder Crash team vary based on the title. It is unknown whether characters present in Unreal Tournament are intended to correspond exactly to same-named characters in later titles.

For example, the Unreal Tournament backstory for Othello, indicating he is an "ex-trader for the Curan Financial Commision" apparently contradicts the backstory presented in Unreal Tournament 2004 where it is indicated he was "trained [for Thunder Crash] from the age of nine."

If you're looking for the pictures and artwork regarding Malcolm, you might want to check Malcolm. 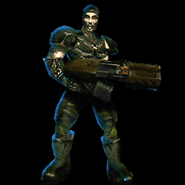 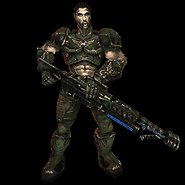 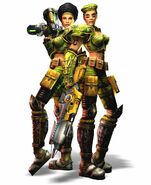 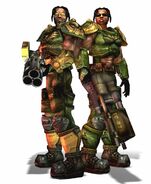