"The colossal Titan looks nothing short of unstoppable, and he’s a little tougher than he looks. The wise will avoid him when possible. If avoidance is not an option, don’t stand in one spot very long and stay out of his reach."
– Unreal manual
"Life was hard, then it got harder. I hate titans!"
– Prisoner 849's log entry

The Titan is a big creature from Unreal and Unreal Mission Pack: Return to Na Pali.

Titans are huge semi-sentient creatures that are indigenous to Na Pali. The basic Titan is a mixture of brown-orange and grey-white with red eyes. It is ten meters in height, it weighs from 15-16 tons and can be usually found in rocky areas. The Titan is aggressive to other lifeforms due to their sheer size and mass. There also exists a rarer species known as the Stone Titan, which has grey skin and a greater endurance to weapon fire. Titans are one of the deadliest enemies in the game, and due to their great mass, they should be defeated quickly. 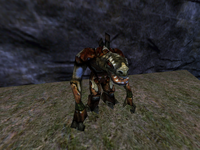 A Titan in Unreal
Add a photo to this gallery

Retrieved from "https://unreal.fandom.com/wiki/Titan_(monster)?oldid=35833"
Community content is available under CC-BY-SA unless otherwise noted.