"Provides you with vital information, clues and hints about the game. Whenever you encounter an item the Translator can analyze and interpret, a message will display on your screen and your Translator icon will begin to flash. Hit F2 to activate your translator and read its analysis. Hit F2 again to deactivate the Translator when you are done."
– Unreal manual

The Translator, also called the Universal Translator, is an item in Unreal and Unreal Mission Pack: Return to Na Pali.

The Translator is a small, handheld computer which allows the player to read various messages and events in the game by decipher notes, signs, and other items in different alien languages into Earth English, usually the languages of the Nali or the Skaarj. It is useful for proceeding through the game as many messages contain helpful hints and clues to puzzles. This is also the main way in which the story progresses due to a complete lack of dialogue or cutscenes besides the ending movie.

Every time the player comes in the vicinity of such an item, the device alerts the player of a new message with a sound. (These events are called "Translator Events" in the game's code.) The device is mapped to a shortcut key "F2", which shows the translated message in the device, or removes the message when pressed again. 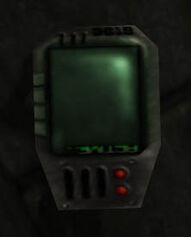 Universal Translator in use 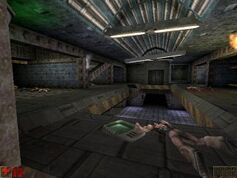 The translator in front of the player, ready to be picked up
Add a photo to this gallery

Retrieved from "https://unreal.fandom.com/wiki/Translator?oldid=25941"
Community content is available under CC-BY-SA unless otherwise noted.