Unreal Wiki
Register
Don't have an account?
Sign In
Advertisement
in: Character stubs, Stubs with tasks, Characters,
and 12 more

Edit
watch 01:36
We're Getting Mutants in the MCU - The Loop
Do you like this video?
Play Sound

Xan Kriegor is a Villain character in the Unreal series.

Grand General Xan Kriegor is a Cybernetic being and champion of multiple Tournaments.

Xan may have been created in a robot factory on the asteroid LBX-7683 in the Erican Cluster, where he functioned as a mining robot built by the Liandri Mining Corporation.

In 2283 Xan led the LBX-7683 Robot Uprising in which several robots turned against the humans on the asteroid, prompting Liandri to send in a tactical squad to quell the rebellion. Xan was captured and resisted several memory wipes but was eventually reprogrammed.

Liandri later entered Xan into the underground Tournaments, which later grew into the legally-sanctioned Liandri Grand Tournament. Xan became the the leader of The Corrupt, a Liandri-sponsored team. Xan won at least two Tournaments during this time. Many people believed at this time that Xan was in fact Jerl Liandri, the founder of the Liandri Corporation, wearing power armor, presumably due to the lack of general knowledge of the LBX-7683 incident by the general public.

Xan was finally beaten in 2293 by Malcolm (Unreal Tournament). Liandri recalled Xan and upgraded him to Xan Mark II, and attempted to gain back the champion spot from Malcolm. This bid proved unsuccessful, and Liandri recalled him again for a complete rebuilding, during which he didn't participate for a number of years. This includes 2302, the year of Unreal Tournament 2003.

In 2303 (Unreal Tournament 2004) Liandri finally re-entered Xan after upgrading him to Xan Mark 3. Although he still failed to become champion, he may become a finalist, depending on how the player plays the game.

It is implied in Unreal Championship 2: The Liandri Conflict, in Devastation's ladder (which is somehow canonical with the events of the game) that she was postulated by the Liandri as her successor.

In UT, his exact origins are unknown, as his character bio says, and some speculate he is either a robot or the CEO of Liandri in a suit. Either way, he is merciless, and has his own armor picture and taunts, only shared with Xan II.

Xan II, also in UT, is only accessible by installing Bonus Pack 4, and has very large amounts of visible circuitry. This version of Xan, as seen above, appears as a boss in the console versions.

UT2004, Xan's last appearance, had Xan as one of the 3 unlockable characters, and shared the same body style as Axon.

Xan Kriegor is the team leader for the Godlike tier team The Corrupt, and one of the possible final bosses depending on how his team fares in the Single-player game, the other possible bosses being Malcolm and ClanLord. 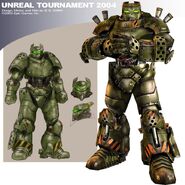 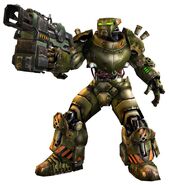 Xan with the Grenade Launcher in UT2004 (Artwork).

Concept Art of Xan in UC2.

Concept Art of Xan in UC2.